My heroes are reality. The childhood defines everything.

I started working on dolls by accident. Because I wanted to have a unique Christmas tree, I decided to make my own decorations but instead, I ended up making dolls. First I made clowns, later ladies, hunters, donkeys, jokers, a queen and a king and rest of the palace inhabitants a prince and a princess, a chef and other servants.

I also made contemporary characters of Tbilisi and a final character – a drunken poet, who is dreaming about it all. These dolls are very small and they live on a two-story shelf.

My paintings were able to save the trees that I had painted.
Unfortunately, the government did not protect the forest and sold it in plots for development. I was standing there painting trees, while the forest around me was destroyed.
In 2002 and 2003 I had two exhibitions with a cause – Save Dighomi Forest. As a result, they stopped the construction and took down everything that had already been built. My civic activism was very unexpected - I used to go to the forest to paint not knowing that those very paintings would became the way for me to protect that forest.

I am still very grateful for my first painting teacher Guguli Kurdiani.

I was very lucky to have Ira Beghanishvili and Zurab Nizharadze as teachers.

After graduating I created my own art studio for children and worked there from 1994 to 2010.

I could have never imagined that working with children can be so productive, not only for children but for artist as well because children’s work is a great source of inspiration 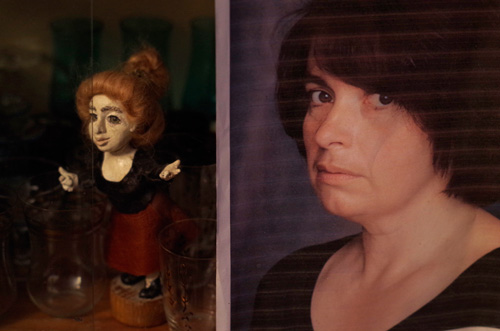 My name is Ana Gabriadze and I was born in Tbilisi, on April 3, 1968.
I used to live in the Old Town of Tbilisi until I was seven. A long narrow street where I lived used to be called "vodovoznaya", as they carried water for sale through that street. We had a rectangle room with large windows through which you could see brownish-red wall of bricks with occasional grey stones. Holes left by missing stones were filled with moss that spread over to the brick wall. The house belonged to an Armenian merchant before the Revolution, until it was taken away from him and divided into several apartments where many different people moved in.

The central part of the house was the so-called Italian yard - a stage of the house. A Kurd janitor and a loader named Abas lived in the basement. Rumor had it that he used to lift a grand piano with his bare hands. I though that his wife Zoze was the most beautiful woman in the world. Abaz had taken her away from her first husband and made her his wife. He treated her like a queen. Zoze was a woman with dark skin-tone and extremely refined hands like those of a sculpture. She used to wear many bracelets and necklaces; you could see gold balls shining near her ears. She used to wear traditional clothes made of silk and velvet, and many colorful dresses... she looked like a bird of paradise (or a firebird).